What is Game mode on vivo smartphone?

Game mode is a feature designed to improve the gaming experience. It has these features below:

Background calls: Call answered during gameplay will remain in the background and hands-free will be enabled.

Hide top alerts: Floating previews will not be displayed at the top of the screen during gameplay.

Game keyboard: The Game keyboard will be brought out automatically when you type. It floats on the interface of the game(This feature is supported in Funtouch OS 4.0 and higher version).

Bot mode: The game keeps running in the background when the screen is black. You can level up in games or earn money while sleeping(Some phones support this feature).

Esports Mode: Turn off background notifications, smartly manage the system resources, reduce the control area in the notification bar to avoid accidental touches, balance the phone temperature and game performance to make the game smoother. (Supported in some Vivo phones such as V15 Pro & V15. And only some games are compatible with this feature, such as PUBG, Mobile Legend, etc.).

Performance preferred: Once enabled, the resolution will be reduced appropriately for a smoother during the specified game(Supported in Funtouch OS 9.0 and higher version).

Warmly Tips: You can go to Settings>Game Cube(Jovi-Game mode) to add apps and turn on the features.

What is AI Game mode on vivo smartphone?

AI Game mode consoles in vivo V19 Neo, Y30 , Y20i, X50 series and other vivo phones with the most comprehensive features. Simply slide inward from the side of the screen to bring up the function shortcuts. There are 4 options:

1st: Background callsCall answered during gameplay will remain in the background and hands-free will be enabled.

3rd: Hide top alertsFloating previews will not be displayed at the top of the screen during gameplay.

4th: Bot modeThe game keeps running in the background when the screen is black. You can level up in games or earn money while sleeping.

How to bring up Game Keyboard when playing game on vivo phone?

2. Touch Add at the bottom to add the game into Game mode；

3. Click the game on that interface to enter detailed Settings interface. Turn on Game Assistant;

4. Small Game keyboard will appear when you type in the game.

Warmly Tips: It is supported in Funtouch OS 4.0 and higher version.

How to use Game picture-in-picture?

Go to Settings>Game Cube(Jovi-Game mode), turn on Game mode(Game Cube) and add the game apps. When playing games, you can slide downward with three fingers or tap “Multiple tasks” in the slide-up control center to reveal the Wechat, WhatsApp, Viber, Line floating window.

Some of our phones support Vulkan but some do not. You can download the Hardware Capsviewer for Vulkan app to check if your phone can support it or not.

Why does the call interface display in full screen while there is an incoming call even though I have turned on Game mode, Background calls and Auto reject calls?

Game mode can only reject the floating previews rather than the floating windows(such as the video calling from the third-party apps) currently. If you want to block it while playing games, please go to Settings>More settings>Permission management(Applications)>Floating window, turn off the app.

Warmly Tips: When turning off Floating window, you might not receive the call from the app.

What is Dual-Turbo engine in vivo Funtouch OS?

Why is there no Esports Mode option in Game sidebar?

Currently, only some devices such as V15 Pro, V15 support Esports Mode and it adapts to only some games such as PUBG. If you long for this feature or hope some games can be supported, please give us a feedback. Highly appreciate your understanding and support.

Why does the Chat Head appear while playing games even though I turn on Game mode and Block floating previews?

Currently, the Game mode feature can only block the floating previews. The floating chat window such as Chat Head cannot be blocked. But you can go to Settings>(Jovi-)More settings>Permission management(Applications)>Floating window to disallow the app to create the floating window to turn it off manually. Then it won`t appear when you play games.

Why can I not bring up Control Center while playing games?

1. Make sure Bring in up on an app interface in Settings>More settings>Control Center is turned on;

Slide upward from the bottom of the phone(not the edge of the screen).
Warmly Tips: Control Center cannot be brought up in some games.

How to make a screen recording of videos or sounds?

For Funtouch OS 2.6 and higher version, you can achieve it via Record screen(Screen recording). You can find it by bringing up Control center>Shortcuts>S-capture.

For Funtouch OS 2.5 and lower version, you can achieve it via the third-party apps, like Du recorder. 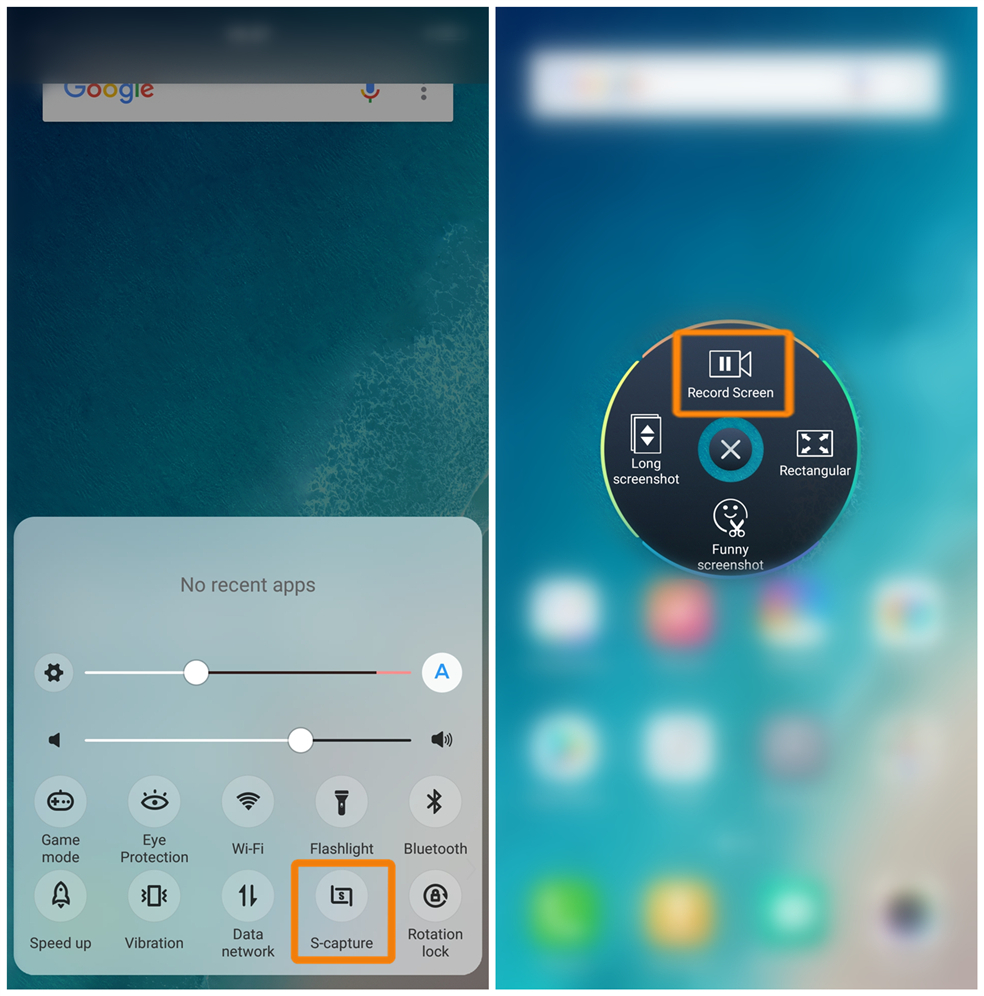